Syncletica of Alexandria was  born in Macedonia in 380AD in a wealthy family that emigrated to Egypt. Both her parents and two brothers died while Syncletica was young and she became the heiress of the family and the caregiver for her sister, who was blind. Syncletica gave the fortune she had inherited to the poor and entered into the solitary life with her sister.

Syncletica taught that we are born three times into life, the first through the womb, the second through baptism, the last in our discipline. When a baby is born, the manner in which it is sustained changes. So when we are born into grace the nature of how we receive life changes. As we progress in the spiritual life we are incubating the life of heaven. Our present experience is a kind of womb feeding us the life of the age to come. We are being prepared for the life of heaven. 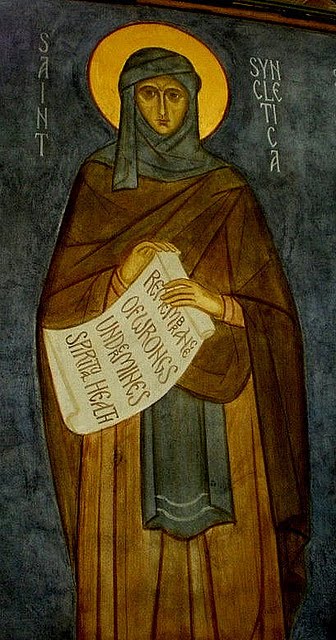 Those who are describing their own successes should also try to mention the weaknesses that go with them.

For those who are making their way to God there is at first great struggle and effort, but then indescribable joy. For just as those who wish to kindle a fire are at first choked with smoke, suffer watery eyes, and in this way achieve their purpose, indeed Scripture says: ‘Our God is a consuming fire,’ so we too must kindle the divine fire within us with tears and effort.

A treasure is secure so long as it remains concealed; but when once disclosed, and laid open to every bold invader, it is presently rifled; so virtue also vanishes once it is known and made public. Just as wax melts in the presence of fire, so also does the soul disintegrate in the face of praises and loses its vigour.

It is dangerous for someone not formed by experience of the ascetic life to try to teach; it is as if someone whose house is unsound were to receive guests and cause them injury by the collapse of the building. It is the same in the case of someone who has not first built an interior dwelling; he causes loss to those who come.

For the Devil, who wishes to destroy all things, or rather to succeed at our spiritual destruction, resorts to the following ruse. On the one hand, with accomplished and ascetic monastics, he tries to cover their sins and to make them forget them, so as to create pride in them. On the other hand, he constantly exposes the sins of neophytes-whose souls have not yet been strengthened in the ascetic life-before them, exaggerating these sins, so as to drive such neophytes to despair, until they abandon their ascetic efforts. To such a soul he suggests: ‘Since you have committed sexual impurities, what forgiveness will there be?’ And to another he says: ‘Since you have been so greedy, you cannot obtain salvation.’

Rahab was a prostitute, but she was saved through faith; Paul was a persecutor, but he became a chosen instrument; Matthew was a tax collector, but no one is ignorant of the grace granted him; and the thief stole and murdered, but he was the first to open the door of Paradise. Keeping these people in mind, therefore, do not give up hope for your own soul.

Let us take an example from the work of the best gardeners, who, when they see that a plant is of small stature and sickly, water it profusely and care for it greatly, so that it will grow and be strong; while, when seeing in a plant the premature development of sprouts, they immediately trim the useless sprouts, so that the plant does not quickly wither.